He was born on April 21, 1964, in the Karkh district of Baghdad. He started his sports career early with the team of Abbas Ibn Firnas Primary School, then with the sons of his locality in the Al-Amel neighborhood in Baghdad, after that he joined the Yarmouk Youth Center, then coach Mumtaz Thomas chose him to join the Iraqi team lions, who participated in the Gotia Junior Championships, and although he only participated in 10 minutes, but he gained great confidence that encouraged him to continue his career in the ball, and again in 1981, coach Daoud Al-Ghazawi chose him to participate in the same tournament in Sweden, and this time succeeded in achieving the title, and the award of top scorer with seven goals. 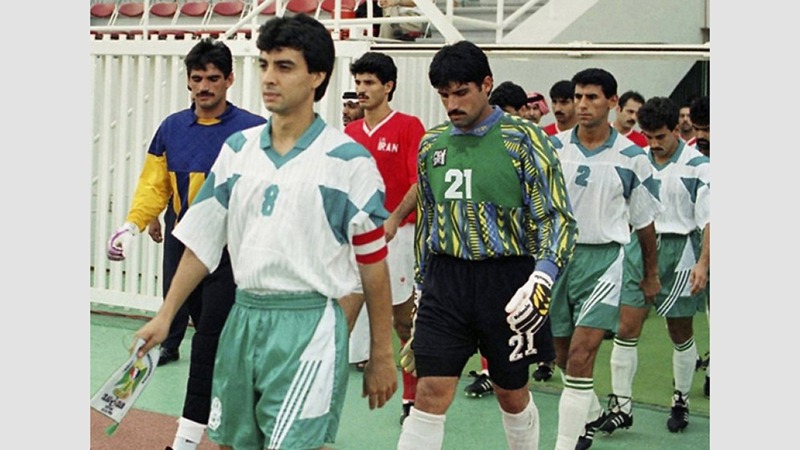 He is the Iraqi legend Ahmed Radi Amish Al-Salihi, who joined at the age of 16 the Police Club youth team, then moved to Al-Zawraa Club, the junior category, and played in the first division, at the age of 17.

Jalal Abdel Rahman, who was then coach of the Cubs team, noticed Rady’s talent, so he invited Amo Baba, the coach of the Iraqi national team, to attend a match for Al-Zawraa team in Tikrit, who in turn attended and watched Rady, and then summoned him to join the Iraqi team, as the youngest player to join the team in The history of Iraqi football, and that was in 1982.

Radi’s presence in Al-Zawraa Club, which has the largest fan base in Iraq, gave him wide fame among the Iraqi public. Radi drew attention to him with his skills as a top scorer, in a team that was known of its young players, and he was the youngest among them, as he was still a student in the school.

After two years spent by Radi in Al-Zawra, Uday, the son of former Iraqi President Saddam Hussein, founded Al-Rasheed Club, and worked to gather Iraqi football stars in it. At its inception, the club gathered 13 distinguished club players, among whom was satisfied, and played for Al-Rasheed Club since its founding in 1984 until the decision of the Iraqi Football Association to dissolve it in 1990, during which the team achieved several titles at the level of the Republic, including the Iraqi League Championship for the years 1987, 1988 And 1989, and the 1987 Iraq Cup. At the international level, he won the Arab Clubs Cup in 1985, 1986 and 1987, and qualified in the Asian Club Championship for the finals once, in which it faced the Qatari Al-Sadd and lost to it, and after its dissolution, Radi returned to Al-Rasheed Club again. 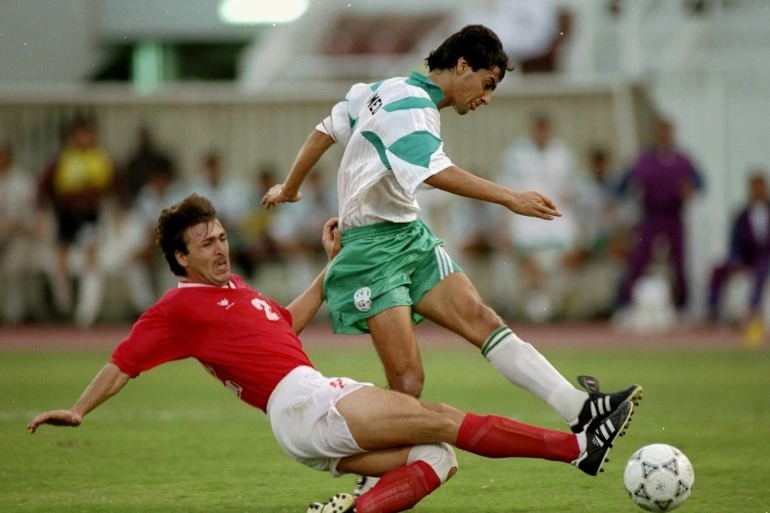 With the Al-Zawraa team, which was called the seagulls, Radi won the title of the White Seagull, his first title, followed by the title of the Flying Seagull, after his skills were manifested in playing in the air, as he often shot with his head and chest, and he had scissor kicks that made the most beautiful goals in his history as a player and gave him the love of the masses.

Among the unforgettable positions of Radi, during a match for the Al-Zawra team at the People’s Stadium, in the period prior to Radi’s retirement, and after a television interview with him at his home, he appeared in him as he put tea, Kelejah (an Iraqi dessert), and Soba, the opponent team chanted, “Kilijah and tea.” And Sobah,” a metaphor for the necessity of him sitting in his home and not playing, given the decline in his performance in the mid-nineties, compared to what it was in the past, when Radi went to the opponent’s audience, and indicated to them with his hand that you are all on my head, to turn the cheers of the audience to encourage him.

Among his goals engraved in the public’s memory was his goal in the Gulf Cup match against Qatar 1988, where everyone believed that the ball came out of the field, as it was near the goal and could not enter, and Radhi shot it to come on the line inside the goal, and no one imagined that he would score the goal, even the goalkeeper, who was dumbfounded looking at him.

Radi played with the Iraqi national team twice in the Olympic Games, the first in 1984 in Los Angeles, and the second in 1988 in Seoul, but he was eliminated from both sessions, and he was unlucky in them. Radi was one of the main reasons for the team’s nomination for the two sessions, and he performed outstandingly during them.

Radi joined the national team in 1982, and played 121 matches with it, during which he scored 62 goals, including the match that made his name, at an international level against Belgium in the World Cup.

Iraq played in the World Cup in the second group, which included Belgium, Paraguay and Mexico. It lost to Paraguay in the group league, with a goal to none, and Radi scored in that match a header that was not counted, because of the referee’s whistle that ended the first half of the match with the ball on its way to the net. The goal that Radi considered correct all his life, then Iraq lost to Belgium by two goals to one, Radi scored in the 56th minute, it was Iraq’s only goal, the only time in which it qualified for the World Cup. 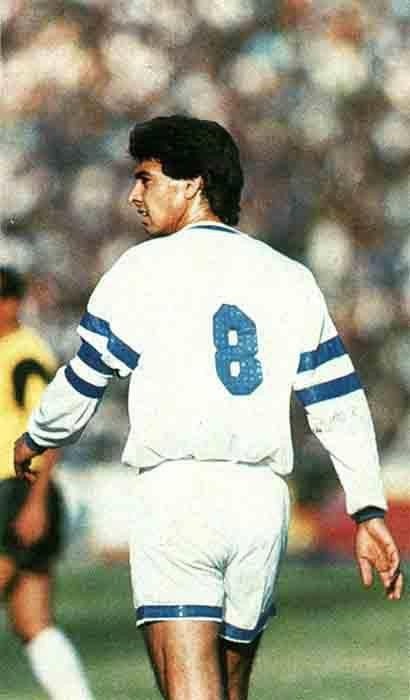 Radi did not forget the coach of the Brazilian national team at the time, Eversto, who suddenly caught him among the players and said: This player will be a star in the future, as well as the coach of Mexico, who came to the Iraqi team headquarters after the two teams match, and asked to see him and exchanged the shirt with him.

Despite this remarkable level, Radi was not able to accept any of the offers made to him due to the war and the ban on contracting, despite receiving an offer from Uruguay in 1988, the year in which Radi won the Gulf Cup for the second time with Iraq, and won the title of top scorer in the tournament. He was chosen as the best player in Asia, so he returned to Al-Zawra in 1990, and in 1992 the Iraqi team participated in the Jordan friendly championship, and won it 13-0, Radi scored five goals, and it was considered the largest result achieved by the team in its history, and in 1993, Radi received an offer from Al-Wakra Club, Qatar, transferred him from a local player to an international player, and was considered the only international professional contract in his career, and Radi continued with it for four years, during which the club reached the final of the 1994 Emir Cup.

In 1997, Radi decided to return to Al-Zawra, to play his last season as a player in his first club, and retired in 1999 after etching his name in the history of Iraqi and Arab football.

He was also considered one of the best players who passed through the Qatari club Al Wakra, as he achieved the title of top scorer in the Qatari league in 1994, and was ranked by FIFA, among the list of the 10 best Arab players in the twentieth century.

After Ahmed Radi finished his career as a player, he went to training in 1999, and chose to coach the Police Club for juniors until 2001, then in 2002 he moved to coach the junior category in the Iraq national team for a short period, before becoming coach of Al-Zawraa Club for several months in the same year, then president of the club in 2002-03, and later refused to run for office again.

Radi later entered politics, where he was appointed as a member of Parliament in 2008, and after the end of the session, Radi did not return to candidacy, as his goal in engaging in political work was to serve his project to establish an academy for young people at the level of Iraq, which needs support from the state to achieve. 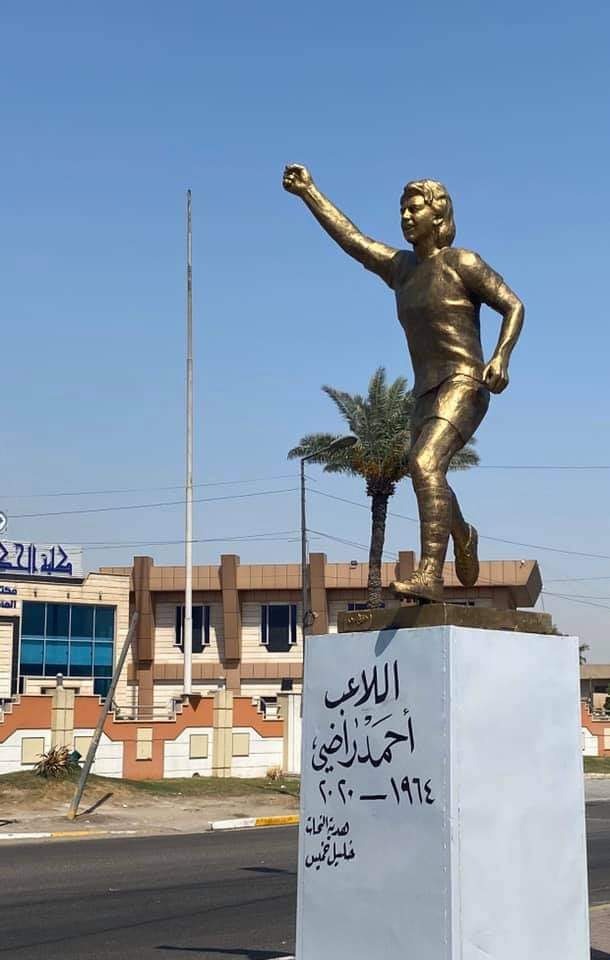 Radi lived with his family in Jordan, until he was infected in May 2020 with Covid 19, after attending a mass party in Baghdad, and entered Al-Numan Hospital, but he preferred the home stone, but later had to return to the hospital after his condition deteriorated, and he did not have time to move to Jordan and complete the treatment, where he died on May 20, and was buried in the Karkh cemetery in Baghdad, and in February 2022, Iraq immortalized the memory of its World Cup star with a monument inaugurated by Adnan Darjal, Minister of Youth and Sports, President of the Iraqi Football Association, in front of Al Shaab International Stadium in the capital, Baghdad, amid a large official and public presence, to be the second player to be erected after the leader of the Lions of Mesopotamia during the fifties and sixties, Jamil Abbas.